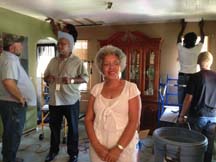 Uneek Lowe, a Cincinnati resident suffering from a genetic brain disorder did not know what to do when the ceiling tiles in her dining room began to sag. With each passing day more tiles started sagging until half the ceiling looked as if it was caving in. “I thought, oh my god the whole ceiling is going to come down. It was a mess,” said Lowe. Without the money to fix the problem, Lowe placed several calls to a local non-profit well  known for serving elderly and disabled homeowners. After weeks of waiting for an answer, representatives told her there was nothing they could do – her situation was not considered enough of an emergency.

With her ceiling on the verge of collapse, Uneek says she knew she had to keep trying. She placed other calls and eventually someone with the state referred her to the Cincinnati-Hamilton County Community Action Agency (CAA). When she contacted the CAA, she was connected to Shawn Kerley, who assured her that he would make sure she received help. “He was so compassionate, considerate and determined to make something happen,” Lowe commented.

Kerley works with CAA’s Youth Services Department, which operates a construction training program for young people known as YouthBuild. YouthBuild is a national program operated by many Community Action Agencies in Ohio that works with at-risk youth ages 18 to 24 and seeks to build character and responsibility in young men and women while teaching them construction skills. Its participants often come to the program without high school diplomas and sometimes with criminal records, but its graduates leave ready for the work force or higher education. The program combines education, leadership, development, counseling, construction and other training skills. Participants of the program work towards their GED, if needed, while learning job skills and serving area communities by building affordable housing. In the past nine years, Cincinnati’s program has had over 250 participants, with 98 percent of them now gainfully employed.

Kerley knew that the YouthBuild program could help Lowe who was given special consideration because of her brain disorder that has limited her ability to work and live a full life. “I could hear in her voice that she was at the end of her rope and really needed help,” he said. Three members of the YouthBuild program were sent to Uneek’s house to fix her ceiling. There was an immediate connection between the YouthBuild group and Ms. Lowe, as they have all experienced hardship in their lives.

Jerome Battiste, a 23-year-old participant in the YouthBuild program working on the project was eager to speak on his experience. “If I didn’t have YouthBuild, I would be locked up,” he commented. “I want to lead by example for my son.” Jerome has earned his GED while in the program and his goal is to attend the University of Cincinnati. For now, he’s happy helping Lowe and others.

Battiste and the YouthBuild crew completed the ceiling in less than two days under the supervision of a professional. An emotional Lowe said, “I want them to know what they have done for me. What they’re doing really means something.” The crew put their heart and soul into the project. This project was about more than fixing an old ceiling, it was about putting the pieces of their own lives together and helping someone at the same time. Lowe now wants to attend the upcoming YouthBuild graduation to show the crew just how much she cares and appreciates them.