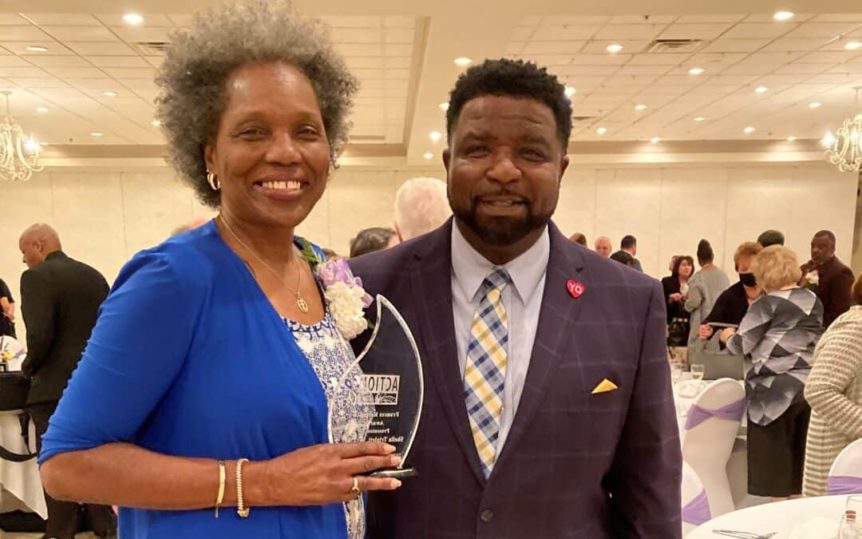 In honor of her long-time community service, the Alliance for Congregational Transformation Influencing our Neighborhoods (A.C.T.I.O.N) of Youngstown recognized Mahoning-Youngstown Community Action Partnership’s executive director Shelia Triplett’s at their annual banquet Tuesday, May 25, 2021.

The A.C.T.I.O.N. Humanitarian Award is one of four awards given in memory of early A.C.T.I.O.N Kerpsack whose significant work for the alliance continues to inspire its members. In addition to the humanitarian award, the education, community service, and institutional service awards also pay homage to Kerpsack’s memory.

In attendance at the ceremony was M.Y.C.A.P. Board Chair Dr. Ben McGee, Chief Operating Officer Marilyn Montes, and the Youngstown mayor, Jamel Tito Brown. The event was live-streamed on both Facebook and Zoom. The award portion of the banquet began with a tribute to Kerpsack, which was presented by Maxine Gordon of St. Michael’s Parish.

“Tonight, as in years past, we are honoring members of our community who share in Frances’ passion and in her commitment to strengthen our beloved community,” Gordon said. Following Gordon’s introduction, a r addressed the in-person and online audience members of Triplett’s career of service work. He spoke of Triplett’s determination to provide senior services to the community’s most vulnerable members.

“When you think of humanitarian, look at the first part of humanitarian: human,” he said. “This person who is receiving this recognition tonight is certainly in a role that looks after humankind.”

After his remarks, Triplett delivered a brief speech explaining the personal and global significance of earning such an award.

“I don’t think there’s a greater time that you could be honored by a program called A.C.T.I.O.N. than now,” Triplett said. “Because it’s not an option to be an ‘action’ now; it’s a responsibility. I get to be a part of an organization whose mission is to serve others.”

The ceremony continued by recognizing the efforts of the three additional honorees, including Erin Bishop of the Youngstown City Health District for community service, Former Youngstown Foundation Director Jan Strasfeld for education, and retired police officer Delphine Baldwin-Casey for her dedication to serve and protect others.

The Ohio Association of Community Action Agencies would like to congratulate and thank Mrs. Triplett for her leadership at M.Y.C.A.P., in Mahoning County, and throughout the Community Action Network. Her lifetime of community service work and dedication to assist all members of her community continues to be an inspiration! This award is greatly deserved.